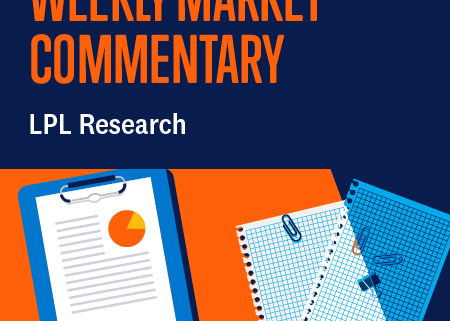 The Federal Reserve (Fed) wrapped up its last Federal Open Market Committee (FOMC) meeting of the year last week, where it hiked short-term interest rates for the seventh time in as many meetings, taking the fed funds rate to 4.5% (upper bound). A day later, both the European Central Bank (ECB) and the Bank of England (BoE) also hiked interest rates, taking their respective policy rates to the highest levels since 2008. Over 90% of central banks have hiked interest rates this year, making the (mostly) global coordinated effort unprecedented. The good news? We think we’re close to the end of these rate hiking cycles, which could lessen the headwind we’ve seen on global financial markets this year.

With the Fed’s 0.50% rate hike last week, it capped a year in which the FOMC raised short-term interest rates at the fastest clip in four decades. Moreover, the magnitude of rate hikes brought the fed funds rate to its highest levels in over a decade. But it wasn’t just the Fed playing catch-up—central banks globally are following suit and raising policy rates in an attempt to arrest the highest consumer price increases since the 1980s. These are “mostly” coordinated because some central banks, such as the ECB, did not start raising rates until four months after the Fed started hiking. As seen in Figure 1, the level of monetary tightening, which began with many emerging market economies, is at a scale not seen in decades.

So how aggressive has the global rate hiking campaign been this year? After last week, there have been over 280 0.25% rate increases (for some context, if the Fed raises rates by 0.75%, that counts as three rate hikes), which translates into a cumulative 70% increase in policy rates. Additionally, more than 50 central banks have raised its policy rate by 0.75% a clip in 2022. Prior to this year, the Fed had only raised the fed funds rate by 0.75% one other time since the 1990s. It raised the fed funds rate by 0.75% at four consecutive meetings this year. Finally, according to Bloomberg Economics, the global GDP weighted average policy rate began the year at 2.8% and is likely to end the year at 5.2%. The 5.2% rate would be the highest in decades.

There are two notable central banks not following suit, at least not yet. The Bank of Japan (BoJ) and the People’s Bank of China (PBoC) have either held rates at current levels or cut rates. The PBoC has marginally cut rates throughout 2022 to offset slowing economic growth from intense zero-COVID-19 policies. While Japan has steadfastly maintained accommodative monetary policy this year, the BoJ will perform a policy review in the coming year. With the current governor retiring in April, it could join the rest of global central banks and start removing stimulus now that inflation in Japan is above target. Stranger things have happened.

Because of the Global Financial Crisis and subsequent “great recession,” policy rates for many countries have stayed at near-zero levels for many years. While there was an effort to raise short-term interest rates towards the latter half of the last decade, central banks were forced to cut rates back to zero due to COVID-19. Over the past nine months though, central banks have raised interest rates, in many cases back to levels last seen in 2008 (Figure 2). In a matter of months, many central banks have effectively unwound over a decade of zero interest rate policy. The rapid increase in interest rates will make new debt for companies, consumers, and countries much more expensive. If interest rates stay at these elevated levels—a big if indeed—the era of cheap money would officially be over.

More work to do?

The Fed has been the most aggressive in tightening compared to the ECB and BoE, yet U.S. inflation is the lowest among these big three (Figure 3). It would seem the Fed is most intent on fighting inflation. These three have intimated that rates will climb higher from here, but markets may not fully believe the magnitude of increases. According to the latest dot plot, the Fed has to convince traders that the Fed is serious. Or maybe more likely, traders know the Fed has a penchant for forecast revisions, so we should not be surprised if the Fed revises the expected peak fed funds rate as inflation, including the sticky components, starts to moderate. It should be noted that, as Milton Friedman stated many years ago, policy rate hikes act only after a long and variable lag, so there is a risk the Fed, at least, has already hiked rates to fairly restrictive levels. However, it seems that the BoE and ECB likely have more work to do to bring down inflationary pressures. And the BoJ? As mentioned, it could start removing stimulus now that inflation in Japan is above target.

After a dizzying year of rate increases, central banks acknowledge there is still more work to do. As such, the beginning of 2023 will likely bring still higher short-term interest rates. In the U.S., the Fed’s recent dot plot, which is the individual committee member’s expectations of where the fed funds rate will end each of the next few years, shows committee members expect the upper bound of the fed funds rate to approach 5.25% at the end of 2023 and to remain restrictive for some time. That means the Fed still expects to raise rates by at least another 0.75%, and it could be several quarters before rate cuts take place. The other major central banks have had a similar message. However, we think most of the rate increases have either already taken place or been (mostly) priced into market’s expectations at this point. And the slower pace of rate hikes is unlikely to roil financial markets like they have this year.

So what’s after rate hikes? At the onset of COVID-19, central banks globally engaged in quantitative easing in which they bought large amounts of various financial instruments to ensure the smooth functioning of financial markets. We saw the size of central bank balance sheets increase by $10 trillion and are currently at $25 trillion for the Fed, BoJ, ECB, and BoE combined. However, these same central banks are set to reverse course and shrink balance sheets to get closer to pre-pandemic levels. As such, balance sheet runoff, colloquially titled quantitative tightening (QT), is taking place in the background but could be a much bigger story in 2023.

What is the likely impact of QT? Frankly, the Fed isn’t exactly sure—this has only happened one other time. According to FOMC member Chris Waller, balance sheet runoff is equivalent to around “a couple of 25-basis point rate hikes.” Moreover, a paper from the Atlanta Fed says a “$2.2 trillion passive roll-off of nominal Treasury securities from the Federal Reserve’s balance sheet over three years is equivalent to an increase of 29 basis points in the current federal funds rate at normal times, but 74 basis points during turbulent periods.” Quite the range of potential outcomes. As such, we could see QT garnering more attention in 2023. That said, the Fed has the flexibility to amend the pace of runoff if the impact on financial markets becomes too deleterious.

Many financial markets are on pace for their worst year in quite some time, or in the case of core bonds, the worst year since inception of the core bond index (1976). With inflationary pressures running much hotter than central bank targets, many central banks were forced to respond by raising policy rates at a speed and magnitude unlike any other year. Certainly, the upward pressure on short-term interest rates was a major cause of the repricing of most financial assets this year. However, we’re starting to see positive signs of inflationary pressures easing, so it is likely that central banks can step down the pace and magnitude of rate hikes in 2023 and perhaps pause rate hikes. While we don’t think monetary policy will become accommodative anytime soon—absent a financial crisis or deep recession, which isn’t our base case—the central bank headwind that took place in 2022 may not be as strong in 2023, which could help many financial markets in 2023.

What are Retirement Plan Rollover Options? Scroll to top